The thrill of the chase, getting the feeling that something about a stamp is just "not right", the thought that you may have discovered something special - all of these contribute to the excitement in sorting through a box of stamps you've just acquired.

Here are some examples of stamp faults or errors:

Albino
This is a stamp which is free of ink. Normally it needs to have a normal stamp adjacent to it - otherwise it could just be a perforated piece of blank paper! Compare with image under "dry print" below.
Colour shift
This occurs when one or more colours is printed at an offset to the others. It can occur in any direction, with any number of colours. Fairly commonplace, not as valuable as stamps with colours completely missing. The following image shows a red colour shift, particularly noticeable on the legs of the flamingos. 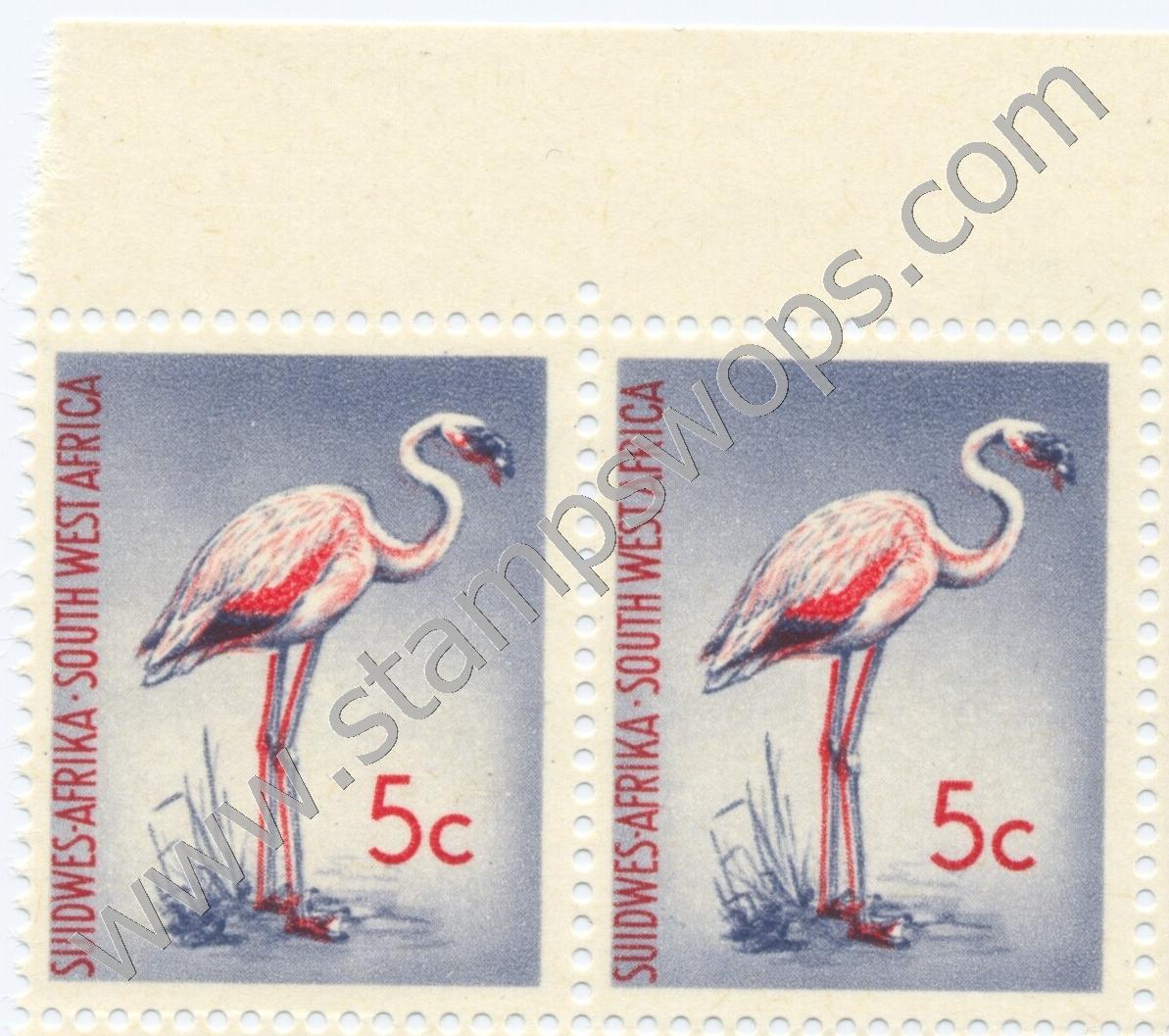 Colour missing
This can occur when a sheet misses one of the colour printings during the production process. Care needs to be taken here because certain colours can be removed by sunlight or chemical means. If the stamp happens to be an example with an attached margin displaying traffic lights - and one of the traffic light colours is also missing - this provides additional proof that it is a genuine fault.
Dry print
Either the stamp image or overprint has insufficient ink. The following image shows both a "dry print" error and an "albino" on the right.

Embossing errors
In the 1960's and 70's some stamps were printed with embossing (indentations or raised areas in the paper). Sometimes the embossing is missing, in the wrong place, or can even occur twice.
Flaw
A fairly common error (the stamps are usually not very valuable), caused by a small defect in the printing plate. It results in a small imperfection on the stamp design. H.F. Verwoerd has a mark in the centre of his forehead in the image below, a constant cylinder flaw occurring on row 2 stamp 4 of each sheet. 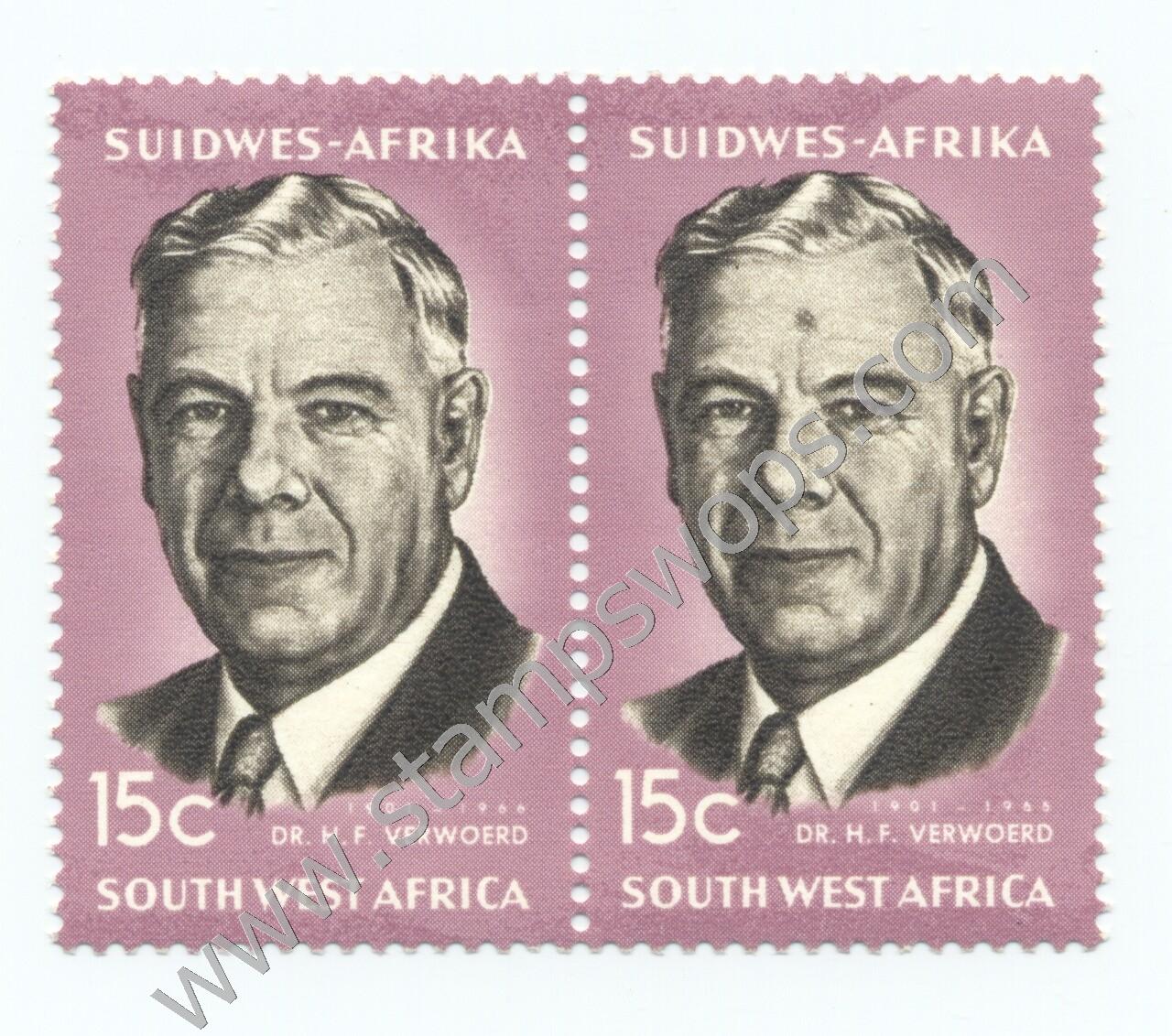 Graphite errors
In 1957, Great Britain produced stamps with a graphite line printed on the left and right of the reverse in order to aid automatic sorting. The graphite lines can be missing, shifted, or there can be additional ones.
Gum errors
Usually this refers to instances where the stamp has had gum mistakenly applied to the printed side
Imperforate errors
Be careful with this one. Because single stamps can have their perforation trimmed off with scissors, only imperforate pairs, strips or blocks can be considered for perforation errors. Additionally, no traces of perforation should exist at all. Even a single indentation (called a blind perforation) will disqualify these stamps as having an imperforate error.
Incorrect value
Sometimes stamps are issued with the incorrect value. Usually this is due to a change in the rate of postage, and not all stamps bearing the old value are returned to the postal authority for destruction. Other causes can be the production of trial stamps which mistakenly reach the market.
Inverted errors
Generally used to describe any error where one part of the stamp design is inverted in relation to the rest of the design. As an example, in 1918 the USA issued its first airmail stamps. The top value in the set, the 24c, was in two colours. The outer frame was printed first, then the central image depicting a biplane in flight was printed in a different colour. A sheet was inserted the wrong way around, and the mistake was not noticed until the stamps had been sold.
Miscut
Usually occurring in booklet issues, these are stamps which have been incorrectly cut at the end of the printing process. Parts of margins or adjoining stamps can appear.
Misperforation
Stamps having an unusual shape due to the sheet being poorly aligned during the perforation process.
Multiple errors
A stamp displaying more than one of the errors defined here.
Multiple impression
During the printing process, a sheet may be mistakenly fed through twice, resulting in multiple images of the stamp design.
Offset printing errors
These occur when some or all of a stamp design is transferred from one sheet to the back of another before the ink has dried. The images usually appear reversed on the back of the stamp.
Part perforate
A perforation error whereby a stamp has at least one side with perforation, but is imperforate on the other sides. Not to be confused with coil stamps where the perforation is missing on purpose.
Paper faults
On occasion the paper can become folded prior to insertion into the printing press. This results in visible irregularities in the design and some very odd-looking stamps indeed. Other irregularities in the paper are also included in this description.
Paper join
A repaired tear or other damage, carried out to the paper before printing.
Perforation shift
A stamp with the perforation in the incorrect place. This can cause the stamp design itself to be off-centre. With regards to value, this may not necessarily increase the value of the stamp. For most earlier issues the equipment used was not always accurate, so peforation shifts were fairly commonplace. This means that well-centred examples tend to be worth slightly more. The exception is a major perforation shift, whereby the stamp design is nearly bisected. These are worth more than ordinary versions, because they would normally have been destroyed during the "quality control" process. 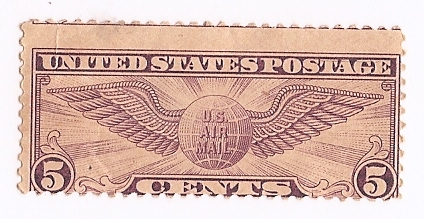 Scan kindly provided by John from the USA


Phosphor errors
The introduction of phosphor bands in order to aid mechanical sorting took place on stamps of Great Britain in 1959. Sometimes the phosphor band is missing or shifted.
Shade variations
Slight variations in colour. Usually fairly common, so they don't add much value as an error. Some fake shade variations occur whereby the colour of the stamp has been artificially altered by sunlight or chemicals. These are normally called changelings.
Tête-bêche errors
Normally occurring in booklet issues. Sometimes booklets are mis-cut resulting in two or more joined stamps with one being upside down.
Uncoated paper
During the paper-making process, a coating was sometimes applied to the paper in order to improve the quality of the final printed image. Paper at the start or end of a reel lacked this coating, and if any stamps printed on this uncoated section were not destroyed, this became another fault available to collectors.
Watermark errors
Typical examples of these are inverted watermarks, where the paper was fed into the printing press the wrong way around. Watermarks can also be completely missing.

If you have a scan or photograph of one of the above errors and would like to see it featured on this page, just use the Contact Me form. (Please do not ask for valuations.)